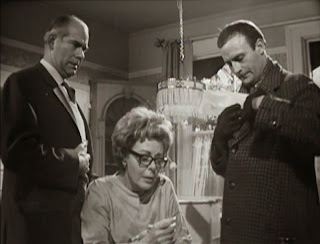 I have now watched all through the Monochrome Years box set of Callan, & have mixed feelings about it. I bought it when I saw it in a shop & it seemed bang up my street. Yet it is somehow different from the other series I blog about here - the tags appearing in larger letters indicate more posts, & therefore a greater liking. Callan is definitely different from what I normally like, it's heavier, more serious, hangs completely on the drama, to the extent that at times the sets are minimal. What I don't like are the really early ones where Ronald Radd plays Hunter: I'll grant he's a superb actor, but how many 60s series can one actor appear in before you see him as Ronald Radd rather than his character? He's also cast slightly out of character, I feel, he's too tubby - the pawn role in The Prisoner suits him down to the ground - the role is better for Michael Goodliffe's lean nervous look. I prefer the ones without Radd for this reason.
I'm also finding the sort of attention that this series demands difficult, coming straight from The Man From UNCLE. However I like this enormously - Callan speaks of a different age of TV drama. It's a play. You can see this show playing easily in a theatre with minimal sets. I don't dislike this, it's different, & also suggests that Callan was aimed squarely at a British audience, not like the shows also aimed at American audiences.
I have chosen this episode to start with because its plot presents a relatively straightforward problem, so it is solidly sui generis. It also speaks of the Cold War era, so now in some ways seems incredibly dated. Any remaining survivors of Nazi concentration camps would be fantastically elderly now. Now that people travel more easily all over Europe & there has been another influx of Poles here in recent years, it is difficult to think back to how these 'refugees' from oppressive regimes would have been seen during the cold war. This episode actually perfectly brings up perfectly that Mrs Rule would have been seen as an alien (I can almost hear how my aunt refers to 'continentals'). This show also brings to life perfectly how damaged these people were & their fragility. This is the strength of Callan as TV drama.
The great drawback to this episode is a whacking great plot flaw. The plot depends completely on the difficult situation of making a damaged concentration camp survivor do something difficult for her to persuade her ex-husband to do something that will prevent a far greater evil, in this case a bomb. For a start this doesn't present an ethical problem at all, from the perspective of knowing the whole story, so the whole plot essentially falls down. Callan knows what is going on & makes the most of his tortured hero role in this episode. In reality the only difficulty here is for Mrs Rule, however polygamy makes her a compromised character, effectually losing our sympathy. Granted Callan's role here is a nasty job but frankly there isn't that much of a quandary & if he can't cope with this kind of situation perhaps he should retrain as a chef! The idea in this episode is that an already compromised character is manipulated by Callan in a very underhand way, but this is over-egged, making the main premise of this episode fall apart.
A further weakness (at least from this distance in time) is again in the Cold War spy milieu: it now seems hackneyed. The scene of Callan turning away in the street so Mrs Rule doesn't see him looks ridiculous. Callan's extreme disquiet when he finds out the KGB are on to what is going on betrays a lack of sang froid, strange in so competent a killer. In the 1960s I would have thought that meddling in East-West relations automatically meant the KGB were involved.
There is something else I like a lot about Callan. I have a feeling he could not exist nowadays. He is totally unqualified, in a way unregulated, involves his mate Lonely at the drop of a hat. The government agency he works for is at best shady, & apparently answerable to no-one. Post 1974 Health & Safety at Work Act Callan would have to be trained, have his competence assured, passed by occupational health, have a written contract of employment & be perpetually buried under risk assessments & method statements. I seriously doubt that any government body employs a talented amateur along the lines of Callan nowadays, making this an evocative trip into a world where such things were at least vaguely credible, even if they never did actually happen. At the end Callan addresses Hunter with a pause before adding 'Sir': this is what places Callan not quite in the gentleman adventurer school - Snowy would never have paused before calling Dick Barton sir - there is a definite employer & employee relationship here, & surely the point is that it is an unwilling one.
All in all I would classify Callan as a change for me - it's out of my normal run of viewing. I like the dilemma set up in this one, although as a dilemma it ultimately fails.
------------------
60s jobbing actors 60s TV 70s TV Callan