The Prisoner: Once Upon A Time 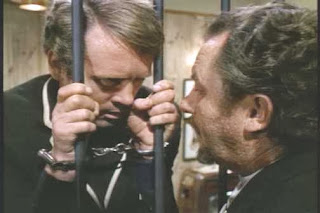 This is another of my favourite episodes of The Prisoner: I love the long-drawn-out interrogation of Drake, which he turns on its head. Unfortunately it does little to confirm the identification of Number 6 with John Drake which is what I am (trying to) concentrate on in this run through The Prisoner, except in one aspect. During Drake's long conversation with Number 2 he says that he knows too much about Number 2. The point is that he is actually behind bars as he says it, indicating that he knows too much to be let out. This confirms to my mind tge principle that The Village was created to contain people who knew too much.
Significantly when Drake shuts Number 2 in a cage, the butler immediately switches sides. This is immediately preceded by an exchange where Drake tells Number 2 that he is not the boss, Number 1 is the boss. That he then locks up Number 2 & the butler defers to him indicates that he is himself Number 1. Yes, we all know this, but from a point of view of examining whether the series supports that Number 6 is Drake, it is helpful. There have been suggestions throughout the series that Drake/Number 6 is behind The Village, & also somehow its raison d'etre (I have tried to loud-pedal these when they've appeared). It is as if Drake didn't trust himself with the knowledge he has, creates The Village to contain himself & others like him.
Of course it had to be at this point the next disc in my box set decided not to work, so it looks like I won't be able to comment on the final episode in any detail for the present. (Grrrrrr). Suffice to say, as I remember it the episode confirms the idea I already have developed in this post, that Drake is the actual 'authority' behind The Village, its purpose, its goal.
------------------
60s TV ITC John Drake seen as the Prisoner The Prisoner