The Prisoner: It's Your Funeral 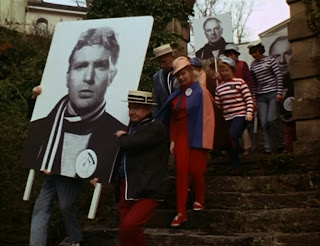 It may seem as if I've taken a lengthy break from this run-through of The Prisoner, which is based on the approach that Number 2 is actually John Drake, the star of Danger Man. I examined a couple of episodes of Danger Man, because they featured the actor Martin Miller, who also features in this episode of The Prisoner. My thesis was that his use & reuse was deliberate (as was that of Peter Bowles in A, B, & C), since The Prisoner is not one of those 1960s series where the same actors keep reappearing in different roles, & his reuse was intended to signify the same person, appearing in different guises. My theory is that he could well be an agent of possibly another Nato power, who also ends up in The Village.
My pet theory aside, The Village authorities have clearly decided they've got to get the information out of Drake, so set him up big time. Time scales are mentioned, & the powers behind The Village are clearly impatient for his information, as part of a bigger experiment. Number 2 describes how they had to pick the difficult lab rat of Number 6, to show how the experiment will work on anyone. Need this detract from the Drake-investigating-his-brainchild-Village theory? My pet identification for Miller's character apart, I feel it does in this episode.
The 'Jammers' story would seem to be the perfect element to develop if Drake's investigation is to be developed, but it remains undeveloped. Instead in this episode it really is more a case of The Village investigating Drake. At least as far as Drake himself is concerned: the broader message of this episode is that nobody is safe in this organisation, & Number 2 is as vulnerable to danger as anyone else. A secondary message (which we already knew really) is that nothing in The Village is true, nothing is left to chance, everything is very carefully set up in the controlled experiment that is The Village, & no eventuality is unaccounted for. Even fake films of Drake warning various Number 2s can be produced at will.
I can see no reason to think that Miller's character is the same person as appears in the relevant Danger Man episodes, in fact when he first meets Drake in this episode he almost visibly recognises Drake. Naturally he doesn't say anything: these are secret agents, & The Village is not a social club. He is clearly on the side of The Village in part of the manufactured plot to assassinate Number 2, so my elaborate explanations of his presence in The Village weren't necessary!
This The Prisoner episode formed a turning point in the production:

'It was around this time that McGoohan's behaviour on set was reportedly becoming increasingly erratic, and George Markstein was to eventually leave the series in a dispute which still goes unresolved. Patrick's assumption of a multitude of jobs, as well as often sacking workers, was causing production costs to escalate and ITC to panic. As a result It's Your Funeral was said to be a very tense shoot, with original director Asher sacked by McGoohan in the middle of production. It's not known how much work on the serial Asher did, though the uncredited McGoohan was the chief director from then on, a star director that Annette Andre said she found extremely difficult to work with.' (http://www.anorakzone.com/prisoner/funeral.html)

This shows in the plot, because it veers away from the Number 6/Drake theory, which is how McGoohan wanted it to be, over Markstein. My prediction is that the Drake/Number 2 identification will become more & more difficult to sustain from here on, & impossible in the episodes after Markstein left & McGoohan took over his job as well as everything else.
The high points of this episode are the activity prognosis on Drake, & Derren Nesbitt as Number 2. Otherwise I personally feel this episode is a disaster. The Village authorities either don't really want to know why Number 6 resigned, since that quest vanishes completely in this episode, or it may just have been another fake from the start. The plot to assassinate the new Number 2 is ridiculous, & would actually gain nothing. The attempt to tell him so that he doesn't believe it will happen is overly-complicated. The pomp & ceremony of the installation of the new Number 2 has appeared out of nowhere. This episode moves the plot on not one jot. Personally I prefer some of the more surreal episodes that come later (nothing wrong with surrealism). From here on, I'm predicting that the Number 2 as Drake theory will have less & less support in the following episodes, reflecting the change of direction that took place as the series progressed. Unfortunately I feel this means it hangs together less well as a series, having lost sight of its original raison d'etre, but I'll examine the coming episodes in the light of the Drake/Number 6 theory, & see what I find.
------------------
60s TV John Drake seen as the Prisoner The Prisoner