The Prisoner: Fall Out 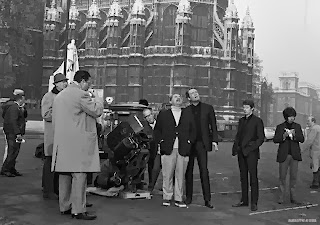 Fortunately I've found a single disc with this episode, so can now finish my blog posts on this viewing through The Prisoner, which are based on examining the thesis that Number 6 is John Drake of Danger Man. The thesis is of course that he invented The Village himself, as a security of home for agents who were a risk themselves or presented a risk to security, was horrified at what he heard of it, & resigned so that he would be taken there & could investigate. It has been some time since I have watched The Prisoner, & I was expecting that this episode would provide no support for this theory, which was created jointly by McGoohan & George Markstein, & the received wisdom is that McGoohan changed the series markedly in a different direction - some change was also imposed by changes in episode numbers & the lack of the projected second series - after his conflict with Markstein became such that Markstein left the programme.
There are two huge problems with this episode for me. The first is that it is blatantly obvious, from the point at which Number 2 dies, who is Number 1. Number 6 is treated in a deferential manner that can only mean he is Number 1.
The other thing wrong here for me is that this episode is too much of a disjoint from the episodes that have come before. The theme changes so much that this episode fails to tie up the threads from the rest of the series, in fact Fall Out seems to turn much of the theme of the rest of the series on its head.
I've also never really understood why this episode is so controversial, since the main message for it - basically to keep your head when all around you are losing theirs - is to me quite obvious. Perhaps this is something lacking in me, perhaps this episode has a quite different effect on those less egotistical than me. To me it is self-evident that I personally am the ultimate authority for myself (I'm not even that tongue-in-cheek as I say this), but there are a lot of people who don't feel like they should trust themselves. For religious reasons, or reasons of upbringing, a lot of people think it better to put others' opinions above their own at all times, to be subservient, & what have you. I can see that this episode would have a quite different effect on them than on someone like me. On the other hand this episode has an important message for both sorts of people: the importance of coming face to face with yourself. If nothing else The Prisoner is about the inescapable self, that has been sought in every episode, most of them with heavy psychological underpinnings. Frankly it makes me wonder the sort of people these 'risky' agents, & indeed Number 6, were, if for example Number 6 was so disconnected from himself that he couldn't see that the whole point is him. The Village, The Prisoner, is all about him, there is ultimately nothing else. It is interesting that if you google this episode, amongst the related searches you get searches for explanations for this episode. That is, to my mind, to miss the point, to ask somebody else what it means, & to lose the opportunity to be faced with your own self. Work it out!
This is not completely different, in fact is only a slight recasting, of the theory that the point of The Prisoner is about society's expectations, that it is society that makes us prisoners. In making an ending that so angered viewers, the theory goes, McGoohan actually promoted the rejection of society's imprisonment, in refusing that he idolised as the super-spy. In isolating this theory I'm not denying that all episodes can be understood on many different levels, & there will be multiple possible explanations for Fall Out.
I even think I can make this episode fit into the constraints of the Markstein theory. Drake invents The Village, resigns, goes there, investigates. The fact is, at the end, Drake merely finds out that he is himself the point. QED!
One of the things I like about this episode is that it is classic surreal late-sixties television. I know that McGoohan was terribly straight-laced, but it would tend to confirm the impression I voiced in a previous post that the production team got more & more stoned as the seried went on! My absolutely favourite bit is the bit where McGoohan is running with the butler, it's so different from the butler's normal staid gait.


And so my romp through The Prisoner ends for this time round. I've been wanting to watch the series from the Markstein point of view for ages. My prediction was that the Drake/Number 6 identification would only be sustainable in the earlier episodes, so it's come as a pleasant surprise to find how possible it is to twist the show to suit the theory!
My conclusion has to be that yes, it is possible to view The Prisoner retaining the assumption that Number 6 is John Drake. I believe it credible that The Village was his brainchild, & he resigned, intending to investigate, & only to find that since the baby was his brainchild, he himself was the source of all he hated about The Village as a microcosm of society.
I don't doubt for an instant that I'll be returning to The Prisoner on this blog (I like a gap between viewings though). I'm becoming keen on the idea of watching through it with the understanding that actually the butler is Number 1...I mean he goes home with Drake, doesn't he? And even the door opens in the way they do in The Village!
------------------
60s TV John Drake seen as the Prisoner The Prisoner