The Prisoner: A Change of Mind 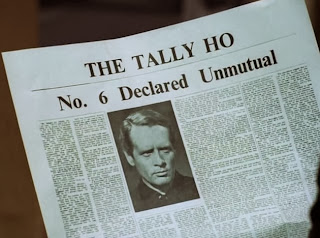 This episode comes as a welcome relief to me after It's Your Funeral. Things actually happen in this one to develop our understanding of The Village & Drake: it's just a pity very little happens (at least superficially) a propos the Drake/Number 6 identification that is the main point of this run-through of The Prisoner.
For me the first point of this episode remains (perhaps as a hangover from It's Your Funeral) that nothing in The Village is real. The course of 'unmutualism' treatment to which Drake is subjected, then the 'social conversion' to which he is supposed to be subjected, is plainly set up & Drake knows it. His demeanour throughout is one of a man who knows that the threatened action is not actually going to happen. The only real dangers he faces - & acts as if he is facing real dangers - are the three occasions in this episode where Villagers subject him to physical violence. Since the ultimate threat (lobotomy) is not real, the significance of the Villagers inflicting the real danger on him & then dragging him to the hospital where everyone, presumably, thinks he is going to have a lobotomy, is to indicate that the danger's location is The Village, the artifical contrived environment, rather than the authorities.
This tells us something about Drake. It is unavoidable, but it seems to me that this episode still confirms that he set up The Village, & knows full well how it works. This is the deeper theme of this episode. He knows the set-up well enough to know he's not really going to have a lobotomy. He knows that's not the point. He must therefore know the real point of The Village already, since he set it up. Drake himself is therefore the source of the evils that go on in The Village. It is supposed to be that he didn't like what he heard about The Village. To me this means he doesn't like that part of himself. The message of The Prisoner is therefore more related to psychology than intelligence, it is about the shadowy parts of ourselves that horrify even ourselves when we actually investigate them. Seen like this The Village may actually be a more therapeutic thing than it's normally given credit for: by reducing the resigned agents to such painful passivity & forgetfulness, in addition to protecting their knowledge, it protects them from the things they have done. This is the point of the 'confession' scene as related to social engineering:

'The thing was that "actually existing Communism" (to use the term of art) was defined by a lot of things, but one of the key ones was that it focused on the creation of a radiant future for which people as they are today were completely unsuitable. When Number Six is declared "unmutual," it means he isn't even trying to be suitable for that sort of future. His fellow citizens who confess and conform to both the letter and spirit of the thing aren't any more ready, but they are worthy to keep building it. In Stalin's day, many Russians released from the Gulag (despite incredible hardship, disease, and psychological torment) desperately wanted to rejoin the Communist party and demonstrate that they might still be ready to work for that future.' (http://www.douxreviews.com/2012/06/prisoner-change-of-mind.html?m=1)

So in a sense, what Drake is subjected to in this episode is intended to change him, but not in the way it is made out. I feel it is intended to extract a confession from him, or admission that he has done some sort of wrong, such as actually being behing The Village set-up. In a sense I feel this is actually one of the episodes that can be most easily interpreted in Christian terms, with Number 6 representing the fallen man, who yet refuses to accept the salvation through conversion offered by Number 2. In non-religious terms, Drake comes across as a flawed character: his arrogance is incredible, especially assuming he is the mind behind The Village. In fact the way he turns the whole situation round on Number 2 is exactly the sort of thing Number 2 would do!
A question this episode brings up often is just why the Villagers are so amenable to the ridiculousness that goes on around them, being willing to march around, cheer, shout, get up an art exhibition, etc, all without warning. This is actually simple: The Village is run like a cult, with a leader who is ultimately invisible. The point for everyone being there is that - to return to Christian imagery - they have looked into themselves & realised they are sinners. The way this usually goes wrong for Christians is either to continue to think of themselves as such terrible sinners theybecome too sympathetic for others' sin & can't blow the whistle on some terrible things such as child abuse, or else they see themselves a redeemed & incapable of sin. In The Village, you are encouraged to focus on your own 'sin', confess it to the authorities & then carry out the 'penance' - a bunch of pointless things to do - the authorities give you.
In conclusion I feel that this episode is actually capable of interpretation in the light of the Drake/Number 6 identification, & in fact gets close to the nub of that theory, because it reveals that actually Drake is behind the evils of The Village. His quest to investigate The Village has become an inescapable journey into himself, in which he can't avoid the part he himself has played in creating the evil.
------------------
60s TV John Drake seen as the Prisoner The Prisoner