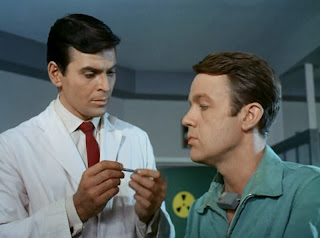 Another great favourite Champions episode of mine, this one, & once again one that gets very close to The Avengers' formula of diabolical masterminds infiltrating the Establishment. It also draws on the feel of the real history underlying The Prisoner. The reason the research establishment feels so real is that we know there were secret government establishments based in Scotland after World War II, & the inmates were often there because they were a risk or were at risk, so could not leave.
The pre-titles prologue is strongly Prisoner-influenced. It must be possible to think of a village post-Prisoner without The Village's influence, but this sequence clearly draws on & parodies it, since the man wants to ring the authorities urgently. The fact he goes into the village shop is a Prisoner reference, & the fact the shopkeeper is a law unto himself is, too. The Prisoner is further drawn on in the sequences where a sound torture technique is used to get information out of people: if you don't die in the process you are killed anyway.
After the titles, the sequence where one member of the team shows their superhuman powers parodies The Avengers, Sharron wine-tasting at a vineyard with superhuman perfection. The exactness of the year parodies The Avengers, which is already a parody of the upper-class world of wine tasting, etc. The Avengers is normally considered the domain of postmodernism, but parodying the parody has got to take The Champions there as well. This sequence is slightly different from most of them, where often something is done to save a child in danger, for example, something worthy. Here the super power is just plain fun!
A further show drawn on is Danger Man, with its use of gadgets. Here a microphone in a ruler fails, so is trumped by the super abilities of The Champions, using a dog whistle.
However these echoes of other shows are given a very Champions slant by the use of recurring motif of science as both something with endless possibilities & great vulnerability to abuse by the aforementioned diabolical masterminds. It is also an archetypally Cold War story, of the great & the good just vanishing. Of course it is also the fact that these people, being scientists, are capable of using chemistry to their own purposes, turns the whole thing round on their captors.
A plot weakness is the way the dead body that sparks Nemesis's involvement turns up in London, having been shot in Scotland. That seems to me very bad management: when I set up my secret research station aimed at taking over the world I will ensure the agents I kill remain well hidden, rather than advertising the fact. As far as the plot is concerned this is an unnecessary flourish: it would have been enough to have the scientists vanishing. I realise the whole establishment is bugged, but it also seems frankly incredible that the microphone on Barratt's collar would pick up his voice & nobody else's.
Of necessity this Champions is mostly confined to sets: this does not in any detract from the story, in fact the windowless sets of the research station exactly give the enclosed feeling necessary to the story. When the collar is removed from Barrett's neck, it also feels genuinely suspenseful. I think my favourite moment in this episode is where Nicholas Smith is pinioned on the floor: it is nice to see him in a relatively sinister role rather than Are You Being Served.
This is a strong Champions contender. It does, however, also have a clear moral, demonstrated by the ease with which The Champions get the scientists to revolt: holding people to the grindstone generates resentment. Clearly the criminals here were not our sort of people at all.
------------------
60s TV ITC The Champions