The Champions: The Night People 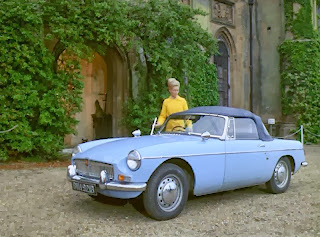 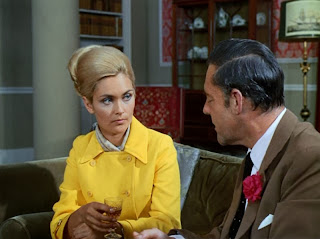 Some may disagree with me about this (I wouldn't go to the stake for this opinion) but I would like to call this a Champions show set in Avengerland. I don't literally mean the countryside round the Borhamwood studios, but even though its location is Cornwall it's actually set in an England of decayed gentry, frightening locals & megalomaniac plans hidden under the - naturally completely unconvincing - cover of Cornish witchcraft. This is exactly the sort of cast found in later Avengers episodes! There are even shades of the Avengers in the false replacement for Sharron McReady.
Several 60s regular actors in this episode: my favourite is Trennick, played by Terence Alexander. It isn't so overdone here, but I love him in ex-RAF mode in the Avengers episode The Town of No Return. I previously associated him too much with Charlie Hungerford in Bergerac, a character with whom I had no naturally affinity. I had no idea the poor man died of Parkinsons's Disease, & am especially intrigued to discover from his obituary that he was preoccupied with numerology:

'Even at the time of his first stage appearance - on 23 December 1939 in Harrogate, as the young journalist in JB Priestley's The Good Companions - he was forming the view that 23 was, for him, a mystical number. As time went on this hardened into certainty. His school number at Ratcliffe college, he would point out at the dinner parties he loved giving, was 23. His first important part, with John Gielgud in Macbeth, opened on 23 December 1941. He joined the army on 23 April 1943 and was wounded, his leg damaged and his foot half blown off by shrapnel, on 23 April the following year. He was demobilised at the age of 23. He married the 23-year-old Juno Stevas, idiosyncratic sister of the politician and barrister Norman St John-Stevas, on 14 January 1949 - he had intended to marry on the 23rd, but it was a Sunday.

'And it was 23 years later that the marriage ended in divorce and he married the actress Jane Downs - by which time he had not shed his numerological beliefs, though he was less keen on mentioning them.' (http://www.theguardian.com/media/2009/jun/03/terence-alexander-obituary)

Alexander was known for playing toffs & rogues, & he certainly manages to be a complete rogue in this programme. Of course the magic pose is a cover, but it seems he is also quite happy for his own wife to play along with this: she genuinely expects witches to come from all over for the ceremony.
The secret powers are better displayed in this episode than The Body Snatchers, with more emphasis on just knowing things. Unfortunately at times this can almost be a plot weakness because it allows the plot to move on without explanation, which is not the same as magical omniscience. The effects also don't always look so good on screen: Richard's speed typing is clearly speeded up, once again giving a slapstick effect: I feel it would have been better done as a close up on his hands speeded up. A further weakness is the place where The Champions communicate by banging on beams & fireplace: the sound effect implies that it is a psychic thing that can only be heard by them, but hammering on a main beam of a house should be audible even to non-psychics!
It's extraneous to the actual plot but one of the things I like best about 60s television is the contemporary street scenes, & this episode begins with a stonker. My favourite bit of this is the visit to the witchcraft museum, where the woman tells Sterling how she is a witch. The scene, while tongue-in-cheek, manages also to sew the seeds of fear in the mind. This is cleverly combined with an apparent break in the psychic communication between The Champions. To my mind any involvement of magic has to be handled very badly to fail televisually, so it has to be a winner, although the visual effect of the men in white combines this idea with a vision of the Ku Klux Klan. Oh, Steed's library is in Trennick's house - the distinctive red & black bands displayed to good effect.
However, the point at which The Night People lost me was the point at which the counterfeit White Paper was discovered: how ridiculous! The whole plan was incredibly unlikely to take anyone in. And come to think of it, the stock footage of a Caribbean carnival was frankly gratuitous.
So despite some major plot holes, I appreciate the atmosphere of this Avengers-esque episode, some majorly good acting by quality actors, & some genuinely spooky moments.
------------------
60s TV ITC Steed's Library The Champions