The Champions: The Fanatics 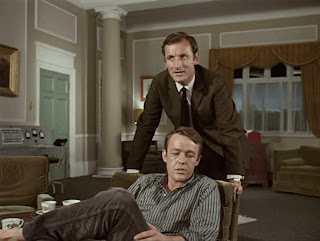 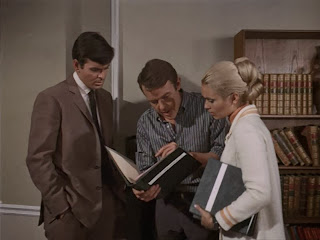 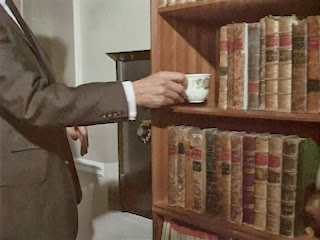 It's difficult to see how you could fail, when you open a show with an external of the house used for The Avengers' episode The House That Jack Built! On the other hand, this one shows how truly incestuous 1960s TV was by using Gerald Harper as a totally convincing & chillingly calm villain, who nonetheless makes me wonder what Adam Adamant is doing in The Champions! It's not really a TV star as such, but Steed's library turns up here with some good shots, sadly not good enough to be able to read the titles on the books.
I like the plot of this Champions very much: this may be because it is essentially a straightforward detective story (with a supernormal twist of course, in terms of knowing who the fanatics' next victim is. I feel this makes it much more believable: the swap of an agent for a convicted criminal is a simple espionage trick that would be believable in the real world, which contrasts favourably with the sheer fantasy of some Champions scripts. One of the effects this show could be intended to have on the viewer is that of fear, by which I mean fear that a criminal organisation with the wealth & sophistication (paralleled by Intercrime in The Avengers) could actually exist & be jeopardising the safety of us all. This is of course where the relative realness of this plot help in creating this real fear.
Another thing I like hugely is Gerald Harper as the villain. His distinctive voice, & the almost languid way in which he speaks actually makes me think he is more suited to this sort of role than the Adam Adamant role. He comes across as a cool customer, who at times can be quite chilling.
There are two things that let this programme down for me. He's a minor character but the actor who plays Richard Carson comes across as trying to hard to be working class & failing. The other is the ease with which he just turns up at the fanatics' base - surely that shouldn't happen in reality?
That said this is an excellent Champions episode, with real suspense & emotion. The high point has to be Harper's performance though.
------------------
60s TV Steed's Library The Champions