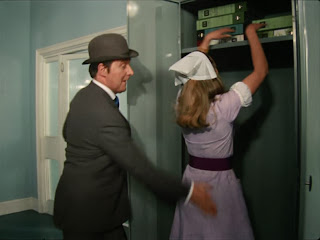 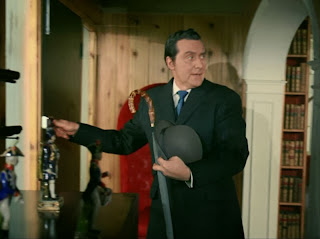 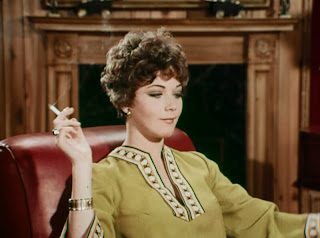 This is the second Avengers episode I'm looking at in preparation for the next episode of The Prisoner, since it reminded me that Split uses the personality/mind swap technique, although in a quite different way to Who's Who. I'm sure I remember seeing this episode on VHS with the standard Series 6 titles, but instead on my DVDs it has some alternative titles, very sixties. Apparently, according to the commentary, made for the American market. This is also apparently a Mrs Peel script reused, although rumour has it it was filmed while the Mrs Peel series was still being filmed.
I think this is the first Linda Thorson Avengers I've written about. She seems to divide critics & fans very deeply. It's nothing to me, personally if I had to pick a favourite Avengers girl, Mrs Gale would be my choice. The irony is, of course that this series best exemplifies the Avengers 'thing': when you think of what the Avengers is, it's often a Linda Thorson episode you'll think of. Of course casting a younger woman as the side-kick changes the dynamic: Miss King is often visibly in awe of Steed. To my mind a sexual dynamic is completely missing between them in this series: while Mrs Peel was in many ways the sexiest of the women, but I feel the most sexual dynamic was actually between Steed & Mrs Gale. I also think in a sense this series of The Avengers is what The New Avengers should have been: filming the series over a decade, Steed was going to get older, & it was time for the sidekick to take over the action, similar to Steed starting off The Avengers as the sidekick. Incidentally another extra on the DVD is the Girl About Town promotional trailer about Linda Thorson, in which she is shown sitting in the set for Steed's apartment, 'smoking': the inverted commas are because she doesn't actually inhale from the cigarette, instead just holding it. She looks endearingly young not-smoking this cigarette.
Split is not short of acting talent, among them Julian Glover, the first 'quality' to appear on Doctor Who. Boris Kartovski is credited as Steven Scott. Unfortunately there is a younger actor called the same name so I have been unable to find out anything about him. Scott manages to perform his character so effectively, given that all he has to do is lie there in ice. He manages to create an aura of menace merely by moving his face, & gives this wonderful impression that Kartovski is such a dirty old man.
Split uses the mind-swap theme differently from Who's Who: it isn't a complete & permanent swap, instead a dormant thing that is reactivated by the word 'Boris', but to the same end, compromising Blighty's security. I wonder how many schoolboys kept muttering 'Boris' to people the day after this was first broadcast, to see what would happen!
One of the things I like best about series 6 is the incredible use of colour. I mean, who would decorate their home like Tara King's apartment if they were not on drugs? Of course here Lord Barnes's drawing room, with its purple walls, plum drapes & green highlights in the antique furniture, provides the headache-causing colour clash. Interestingly, in the DVD commentary on this episode, Brian Clemens describes The Avengers as a pantomime, & what can be more pantomimic than Tara King's apartment interior designed by Widow Twanky?
In fact I think that is the fault with this episode: it overdoes the pantomime aspects, such as the way the baddies *look* like baddies, the handwriting expert is ridiculous, the plot is just plain incredible. When The Avengers film came out I saw it five times, three in Oxford & two in Birmingham. The audience in Oxford laughed their heads off at it. You could tell that in Birmingham it had attracted a different crowd, of Avengers enthusiasts who a) were taking it very seriously, & b) weren't impressed. You don't need to be told which crowd I identified more with, do you? It does seem that you can only approach The Avengers in one of these two ways & Split is best approached in the expectation that it will be a pantomime. If you approach The Avengers without that particular sense of humour, the pantomimic elements of this episode would be better played down. This is again because of the ridiculousness of the plot, as in Who's Who. Perhaps this is a fault in me, rather than a fault with screenplay or production.
That said, I can't find this episode otherwise. The pacing is perfect for the plot. The quality actors play their roles without their normal selves intruding on them. The score builds up the tension perfectly. The reference to Dial M for Murder in a fight scene works well. Miss King is perfect as damsel in distress at the end. Steed is perfect as gentleman hero. He's also perfect when somewhat lecherously he pushes the nurse into the cupboard by smacking her on the bottom. The car scenes work well. The men taken over by another personality do a very good job on the pain & confusion this would cause.
All in all a classic Avengers episode, just perhaps it needs to be approached with the expectation that it's going to be funny!
------------------
60s TV Steed's Library The Avengers