Doctor Who: The Edge of Destruction 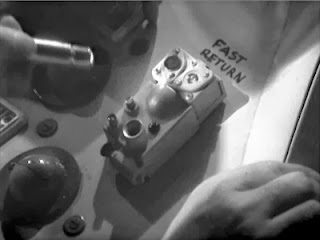 Anyone would think I had the Doctor Who Beginnings box set, the way I'm carrying on... This adventure is a short one, which was come up with to fill in the gap at the end of the first series, after the first adventure was violently rehashed. Considering how it seems little went as anyone hoped it would in the first series of Doctor Who, the wonder is still the way in which, just a dozen episodes into a new series, it immediately feels like Doctor Who, beginning with a scene in the TARDIS, in which the two men are knocked about by a jolting flight. On the other hand it also manages to be completely different to the majority of Doctor Who adventures, taking place completely on the TARDIS, with a cast of only the four travellers.
The story also moves on the Doctor Who 'mythos' somewhat by developing the nature of the TARDIS. Otherwise it is essentially any drama where a number of people are stranded, whether snowed-in in a country manor or ship-wrecked, only adapted to a sci-fi milieu. However, it is a superb vehicle for the characters. Susan managed to get the maximum drama out of the situation, in particular. I don't think it would be too far-fetched to include the TARDIS here as a character in the story, since that is the character that is perhaps most developed, if you include the number of interior shots, etc.
I don't want to give the impression that I think this is a bog-standard stranding story with no merit: the viewer is actually expertly set up to  expect the source of the disturbances to be a strange power that has entered the ship, or then that is outside the ship. It's also a story that reminds me how we watch vintage TV in completely the wrong way, repetitiously & back-to-back, pausing to reference things on the way. TV of this vintage was intended to be watched once with no facility to pause it, & was frequently destined never to be shown again. This story embodies this older tradition of television: once you know the basis of the story you simply cannot watch it twice, because the clever red herrings don't work the second time. I feel this one is probably best watched with a week to separate its episodes, allowing the viewer to come to the second episode with the expectations set up by the first.
I still love Hartnell's Doctor, his cunning is once again at full throttle here, although as it happens Chesterton out-cunnings him. The story also touches on deeper subjects again - trust, power, how we use power & what happens when these things are tried. The Doctor clearly thinks that drugging his companions is in the best interests of everyone concerned, so just does it. The tensions caused by uncertainty cause the crew of the TARDIS to divide down the middle, with paranoia a-plenty. Once again a moral message in a Doctor Who adventure: pick the 'right' friends & enemies, & before you do so, check your facts. To my mind it is a plot weakness that the Doctor doesn't realise, or at least suspect, that the TARDIS itself is causing the oddness, but if he'd checked what was actually happening, he wouldn't have blamed Chesterton for what was happening.
Visually this adventure is superb for being filmed solely in the TARDIS. The bland interiors form a superb background for the developing drama, & a suitably sci-fi background for the varied appearances of the four characters. The pace, to my mind, is exactly right. This adventure is perfect for two fifty-minute episodes. Its only weakness is in the nature of the plot - particularly the way the characters discover something new from the TARDIS whenever the plot needs to be moved on - but this is only a weakness if you expect this to be more than a short adventure designed to fill a gap, & used to develop the characters & situation introduced somewhat perfunctorily in the two previous adventures.
We can forget now how much time there has been for the Whovians to understand the Who world. At this point the world was undeveloped, & to me this adventure was the perfect thing to have at this point to develop the background story more.
------------------
60s TV Doctor Who