Doctor Who: The Daleks 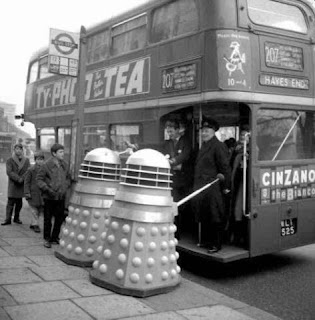 The trouble is that in a sense I know this story too well, having read it repeatedly as a paperback as a child, in fact after Unearthly Child I was all prepared to be unimpressed with the actual TV programme in comparison with my own pictures in my head for this one. This introduction of course indicates that I was pleasantly surprised: good move rushing straight into the daleks as the second adventure, & the story & production both compare very favourably to its predecessor. In fact The Daleks has an incredible sureness of touch, & is so readily-recognisably a Dr Who story so early.
It does seem to me that it *feels* different from Dr Who stories as they would later become. Remember the original purpose of Dr Who being to be educational? This was plainly already forgotten by the time of this headlong rush into sci fi, but it is recognisably more 'worthy' (I can't think of a more suitable word) compared to the ITV serials of the time I watch. A scientifically-minded child could really get into the kind of mechanisms & systems mentioned in this programme, despite it being completely fictional.
I like Hartnell's Doctor lots. He is as far as I know the only overtly elderly Doctor Who, & Hartnell plays it for all it's worth. The Doctor here gets the most out of the cunning that old people often have, which of course leads the others into trouble here. It is either a weakness on his part that he takes a hasty look at the geiger counter before rushing out of the TARDIS as it leaps up to danger point, or if not it's a mammoth plot weakness. My main criticism of this serial, though, is the same as everyone else's: it's not a seven-parter really, five would have been enough for the available plot. Apart from the sci-fi aspects, the plot is a straightforward adventure story in a Boys' Own vein, a safe choice plot-wise for a young TV series.
Is it just wrong that I always feel sorry for the daleks? I certainly take to them more than to the Thals. They are genuinely scary in this serial, despite not being the figures of personified evil they became. I think my reaction along these lines may purely be because the viewer is plainly supposed to feel sympathy for the Thals. I don't like the Thals' pseudo-Classical names. I don't like their costumes, I mean, what's the point, have them clothed or bare-chested, but the garments they have on are plainly not functional. The Thals (that formerly terrifying warrior race) lost my sympathy when it became apparent, soon after their appearance, that they didn't know the city was inhabited. Didn't they think to go & have a look? The Daleks elicit my sympathy because they're ill, it's cynical to want to copy the medication for themselves while their visitors die, but a race mutated & exhausted by a thousand years of war are plainly at their wits' end. We are *supposed* to feel sorry for the Thals, but the daleks also bear their wounds, & in this serial come across as frankly naïve & easily tricked. This series does it completely right *not* to show the Kaled taken out of the casing, beyond a claw. This of course feeds the horror in the imaginations of the viewers, but I still think the Kaled's claw is pathetic. It stops moving, & the Kaled has plainly died outside its protective casing.
This serial is sooo much of its time, since its moral concerns are solely warnings about war, & particularly the effect of nuclear war. If anything was meant to scare the kids off a-warring, it was the threat of turning into Daleks after the holocaust. There is no ambiguity here, the Thals have learned the lesson about war & the Daleks haven't, the Thals are good, the Daleks bad. It has all the complexity of a spade. That combined with the series's rather didactic tone makes for a series redolent of a different age of television in all sorts of ways, but the strong plot & characterisation put The Daleks into the stonking good television bracket for me. Absolute best bit: the puzzling way the Dalek's head sensor wobbles up & down when it can't get through a door jammed by the Doctor.
------------------
60s TV BBC vs ITV Doctor Who